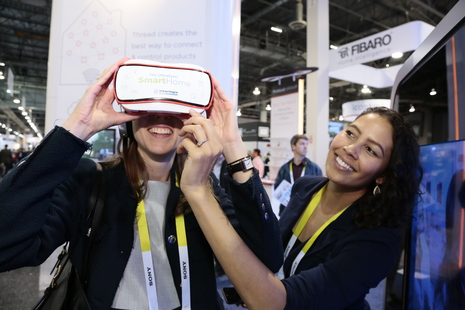 At this year’s CES, we stopped by a number of virtual reality companies at their booth to try out their latest VR products. Here we provide a quick overview of some of the noteworthy ones:

The most impressive of all was Oculus’s Crescent Bay demonstration. Oculus have almost completely solved the motion sickness problem, and the display resolution appeared much better than the Gear VR, better than anything we’ve tried so far. The demonstration was one of the most immersive experiences to date.

Samsung showcased their latest release, Gear VR powered by Oculus, at this year’s Samsung pavilion. People were lining up for up to an hour to view the demo.

The Gear VR is like a smartphone accessory, you will need to have a Samsung Note 4 in order to access the VR content. Once you slot your note 4 into the goggle, the micro USB connector will automatically force the phone to open up the Oculus store front, and from there is where users can access content. Currently, Gear VR is only supported by US version Note 4 only and will not work properly if you are using an international Note 4.

This OSVR ecosystem is fully open-source, so regardless of whether you’re interested in working with hardware developmental kit designs, or software plugins for everything from motion control, to game engines, and even stereoscopic video output, you’d have complete access to everything. Game developers, peripheral manufacturers, and virtual reality experts can collaborate together to contribute to this ecosystem.

Companies such as Unity, Unreal, Intel, Bosch, Razer, Sixense, and Leapmotion are all supporters of the OSVR platform. The OSVR developer kit is available for purchase on the Razerstore for $299.99.

This company’s mobile phone VR headset, Go4d VR, was one that really caught us by surprise. The overall design, head-tracking latency, and resolution are fantastic. We like this headset because there’s no strap that goes over the top of the head, so it doesn’t mess up your hair as much after wearing. The headset is also affordably priced at $99 USD, and unlike the Gear VR that can only work with the Note 4, the Go4d VR goggle can work on all smartphones.

The company also launched the C1-glasses, a $20 USD snap-on VR glasses. The glasses are designed to view 3D images and videos right from your smartphone.

This Brazilian based company just released their mobile phone VR headset during CES this week, you can get on their website for $35 USD per pair. The headset is designed to work with all smartphone by using the various phone adaptors provided with the headset. Although the price is cheap, this headset can certain do VR just like any other headset on the market.

After trying out their demonstration kit, we believe Avegant’s technology has the finest resolution comparing to other HMD devices on the market.

The Glyph is a complete multimedia device compatible with anything on the current market. You can hook it up to a smartphone, xbox, Pc, DVD’s etc. You also don’t need to wear your glasses. The model we tried at CES didn’t incorporate head tracking but we were told that the consumer model would have head tracking function integrated.

This headset can serve as a private monitor. Avegant wanted content that works on a traditional screen to be compatible with the Glyph. This mean you can work on your PowerPoint presentation, write a love letter to your girlfriend on an airplane without worrying other people peaking at your screen.

San Francisco based, Osterhout Group (ODG), has been a military contractor for many years prior to entering the consumer market. ODG revealed their consumer augmented reality glasses and the R-6 Smart Glasses.

I must say that the screen resolution, user-interface, and overall experience were the best out of all the AR glasses we’ve tried. But the R-6 is not cheap, the industrial-grade augmented reality glasses is priced at $4,946 USD running on Android platform. The consumer version is scheduled to release later this year and will be available for about $1,000 USD.

This site uses Akismet to reduce spam. Learn how your comment data is processed.